Opportunities for children to learn, grow, shine are sought and seized by eager parents everywhere, wanting more than anything to provide that environment where their kids not only develop whatever gifts and talents they have, but thrive and revel in them. Sometimes, parents’ intentions are to help their child with social skills, with self-esteem, with fears. Sometimes, it is a matter of providing activities to channel energy that needs harnessing and directing in constructive, beneficial ways. Whatever the reason, whatever the intention or goal; I have just experienced the most awe-inspiring, brilliant answer and solution to what creative outlet is available for children living in a world where the value placed on art in any form is diminishing, daily.

These amazing people pull into town in a little red truck, bringing everything it will take to produce a full-scale musical production. In one week. Actors are drawn from the local community’s students, Kindergarten through 12th grade. The characters are cast on Monday, and by Saturday they are providing the community with two performances. The kids attend an open audition, are cast, rehearsed throughout the week in lines, song, and dance. By Saturday, they know their stuff, and put it into high gear. A complete musical is played out on stage; costumes, backdrops, and lighting are spectacular, and the kids phenomenal.

I have been to many productions over the years, and state without equivocation, the version of Pinocchio performed last Saturday was astonishing in how purely captivating, touching, funny, and entertaining it was. The children were completely immersed in their roles, the story was vivid and true to itself, and they were accompanied on piano by a community volunteer who helped make it all come alive. Even little occurrences that could have been “Uh oh, what do we do now?” moments, as when Pinocchio’s hat fell off and landed on the floor almost into the audience, were managed with such humor, grace, and aplomb, one would think it was supposed to have happened that way. 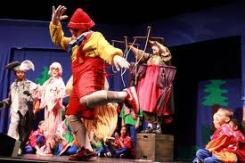 Our family had front row seats, because my seven-year old granddaughter was in the play, and we did not want to miss a thing. This grandma thought she was prepared for her little one to dance in the play, but I have to say, when my little ballerina twirled out onto the stage, I saw her star shine with candlepower intensity that surpasses what usually only is recognized by parents and grandparents. She was a toy ballerina, completely. And everyone saw it. She sang with her whole heart, and everyone heard it. It was one of those moments when a connection was made, a new thing begun, a light sparked and shone where just seconds before it was dark.

With my entire being, I thank the Missoula Children’s Theatre. They have given my granddaughter and children in over 1300 communities in all 50 states, 3 Canadian Territories and 5 provinces, and 16 countries the opportunity to participate in something grand, something unique, and something that benefits themselves and their communities. They have given the gift of performance art to children who are young enough to appreciate and treasure the experience their entire lives.

And I am so grateful I had the privilege of watching my little one in her very first play. A toy ballerina. I will always remember she was spectacular. And I know her light will continue to shine, all because one lovely June morning, that little red truck pulled into our town.