For days, I have been mulling over a landmark Supreme Court decision, and thinking about how far we, as a nation, have come since May 17, 1954. Brown v. Board of Education. Sixty years to get it right; and I am not sure we are there, yet.

To be specific, Oliver Brown, et al. v. Board of Education of Topeka, et al., was a class action suit filed by thirteen African American Topeka, Kansas parents on behalf of their twenty children, in 1951, against the Board of Education of Topeka. The purpose of the suit was to reverse the school district’s policy of racial segregation, which had been in place since 1879. The school district maintained separate but equal elementary schools for white and black students, which based on the 1879 Kansas law, was allowed, but not required. 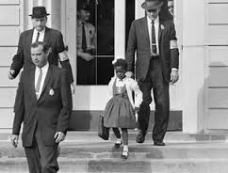 The Board of Education won the suit. Deciding the issue already had been settled in an 1896 ruling, Plessy v. Ferguson, where the Supreme Court had set a precedent by upholding a state law requiring separate but equal segregated facilities for blacks and whites in railway cars; the District Court found schools, for black and white children in Topeka, were essentially the same, thus equal.

Equality of the segregated schools was not the issue when the Supreme Court heard the case. It came down to the legitimacy of segregation as it was held up to the Equal Protection Clause of the Fourteenth Amendment of the Constitution. Chief Justice Earl Warren championed the major argument that the only reason segregation was sustained by anyone was a sincere belief in the inferiority of the segregated population. That belief, as presented and argued, flew in the face of Constitutional equal protection, and the Court, after two previous hearings, in 1954, unanimously overturned Plessy v. Ferguson, thereby abolishing legal segregation in the United States. 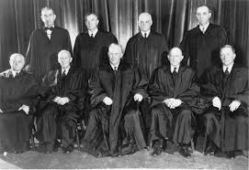 I was seven when Brown v. Board of Education was decided. I recall intense discussions at home regarding the issue; however, the talks were not laced with anger or any negative emotion from either parent, so I did not pay too much attention. Looking back, I believe the talks were more of a speculative nature, trying to anticipate how, if at all, this decision would impact them, our neighborhood, or our community.

It was not until many years later that I began to realize and understand what discrimination and segregation were; because, growing up in my valley town, I did not have exposure to African Americans. I am not sure I ever saw an African American in person as a child; only in movies. It was a time and a place where a behavior, a lifestyle, a societal norm existed, and no one I knew questioned it, challenged it, or expressed anything one way or the other about it. It was how we lived. And it is called de facto segregation. 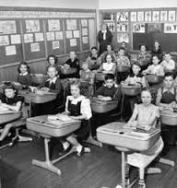 There were two distinct sides of town, and these sides were separated by the railroad tracks at Ninth Street. Whites lived on the north side of the tracks, and everyone else lived on the south side. We never drove to that part of town, and people who lived there never, ever came over to our side of town. In all the years growing up, going to school, shopping downtown, playing in city parks, visiting the library; not one time did I encounter an African American. It simply never happened.

As the Civil Rights Movement took on momentum in the 60’s, and activities were reported on TV and in the newspapers, I became aware of issues I never before had heard of, much less considered needing moral or spiritual evaluation, correction. Then there was a Sunday morning in Alabama. September 15, 1963. The 16th Street Baptist Church. A box of dynamite planted under the steps of the church by members of the Ku Klux Klan. Twenty-six African American children walking to the basement of their church to hear a sermon titled The Love That Forgives. Four little girls killed in the explosion. 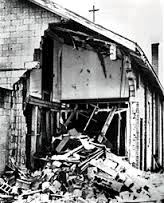 There are pivotal moments in our lives that change us forever. That was one of those moments, for me. I could not fathom why anyone would do such a thing then, and cannot fathom it today. There is no rational understanding, and there is no explanation that takes away the horror of such an act. The only thing I could do in 1963 and forward, was allow that tragedy to be the impetus for educating myself and making a commitment to pursue a just and barrier free life in any relationship I would have; color never being an issue, other than to celebrate our differences, and that celebration applied to everyone, because our differences are what make us unique and relevant.

I wish I could say that half a century later all has been healed, revised, renewed. There have been monumental steps forward, but there are miles and miles to go before the job to achieve true equality and integration is done. And I am certain that if each one of us examined ourselves, and made a determination to abolish discrimination and segregation in our minds and hearts, not just in the places we call home, but in the depths of our souls, where we really live, our society would heave a huge sigh of relief, and peace actually could become the standard in our land.

For now, I like to remember thirteen Topeka, Kansas parents and their children who were brave enough to cross that line, and take a stand for what was right and proper. I like to remember Supreme Court justices who decided to shake it up and dare to be called activists, because that was what it took to make a national course correction. And as I mull over some deeply stirring American history, I remember four little girls who went to Sunday School one morning, and through their loss, became a representation of all that never should have been, and what must never happen, again.

8 thoughts on “To Desegregate Our Souls”