During a conversation with my friend this morning, we meandered into observations of noticeably different characteristics between her generation and mine, especially regarding computers, social media, and information technology, in general. We both really happen to like all things electronic, and are each other’s go to person when one of our technological toys runs amok.

As we talked about when I had purchased that first microwave, VCR, or computer, and the ways in which each of these changed people’s lifestyles, she mentioned it was very special that I had seen so much over the years. I agreed, and then paused, musing over some of the significant events, people, and experiences shared by my Baby Boomer friends and me.

As I considered these, I suddenly was caught up in a realization of how fascinating time actually is, and its passing not particularly noticeable or noteworthy until something touches us, and sparks an undeniable consciousness that we have just seen and lived a remarkable moment in our life. I next told my friend not only had I observed firsthand and benefited from so many of the phenomenal achievements in the years following the end of World War II, I could put those time wheels in reverse, and revel in the experience of having met someone who was born in the 1870’s. I explained this person was my great-grandmother, and I shared about our encounter, leaving my friend suitably impressed with our day’s travel in my imaginary time machine.

It was later in the evening when I gave due thought to that Christmas in 1951, when I was four years old, plucked out of our usual Christmas stay at home, and the grandparents coming to spend the day with us tradition; dressed up in my nicest Sunday outfit, and hustled into our car to drive to our great aunt’s house to spend the day there. My siblings and I protested long and loud at the prospect of not being able to stay home, and play with our new toys, but it was to no avail. We were told my dad’s grandmother was there, and we needed to go see her. I did not know who she was, and was fairly put out by the demand she was putting on my family, and very disappointed Santa’s generosity to me, in the form of wonderful new toys, was going to have to wait until that night. But it was not open for debate, and we kids each got to grab one new toy to take with us as we left for our great aunt’s house.

After a thirty minute drive we arrived, and we three kids jumped out of the car, running straight into the house without knocking, first. The living room of that small home was filled with grown-ups, most of whom were standing around talking, and who all turned at once to see what was bursting through the front door, and into their house. I spied my grandmother, immediately, and felt happy she still would be a part of my Christmas day.  Sassy as could be, I marched up to her, and asked where this great-grandmother was we had come to see. She took me by the hand, and walked me across the room to stand before a small, white-haired, very frail and wrinkled lady, who was sitting in a rocking chair, on eye level with me. She stared at me wide-eyed and silent, while I stared at her also wide-eyed and silent, waiting for something, although I was not sure what that something was supposed to be.

My grandmother introduced me, and then the great-grandmother reached out and gently touched my face with a gnarled spotty hand. She still did not speak, just continued staring into my eyes. That was all she did. Stare at me and touch my face. But at four, I melted. I did not know what drew me to her, or why I wanted to stay close, but I would have been content to sit or stand by her all day if I had been allowed. That was not to be; my grandmother told me I needed to go outside, and play with the other children; so with a big hug, and a pat on my backside, she shooed me out the door.

I have no more memories of that Christmas encounter, and it would be many years later, while diligently researching my family history, before finding my great-grandmother had suffered a stroke, and had been hospitalized. She was allowed to go to my great aunt’s house for her final Christmas, and share it with her family. Sadly, she passed away a week later on January 1, 1952.

From our few minutes together, though, I was able to put into context times and events in our country that most students of history read about with clinical indifference. Having been born in 1874, the woman I stood before, and who touched my face, was the daughter of a Civil War veteran; Ulysses S Grant was president for three more years after her birth, until 1877; the Battle of Little Bighorn was fought when she was two years old; and Crazy Horse was killed when she was three. The United States flag had thirty-seven stars when my great-grandmother was born, and she witnessed eleven more states join the Union (Hawaii and Alaska joined in 1959, seven years after her death).

There were scientific advances, and inventions that took our nation from an agrarian society to a global super power, with two world wars being fought and won in the process. And she gained the right to vote. Yes, in 1920 she gained the right to vote with passage of the Nineteenth Amendment to the United States Constitution, and when she voted for the first time, she took her three grown daughters with her; and the three of them not only walked taller that day, they passed a legacy on to me, my sister, our daughters, and granddaughters. 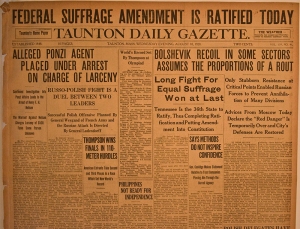 I am fortunate to have had people in my family who loved to write and keep the stories of our simple, homespun folks alive in letters, journals, Bibles and notes; and because we are a record keeping country, I learned even more about this woman I only briefly met on December 25, 1951. Along the way, I also was able to reach back in time, and know her as a child who grew into a woman, who became a part of me when I was only a promise, who reached out and touched my face when I was a little four-year old girl, and who drew me into her heart with no more than her eyes gazing into mine. She was my true gift that Christmas day; that remarkable life moment which inexorably connected the past, hers and our nation’s, to me so early in my journey.