A quiet morning provides me the best thinking time of the day.  Brain and body both are rested, and I feel relatively uncluttered, mentally.  That is not to say my thoughts necessarily are philosophical, analytical, or otherwise particularly profound.  I often just let them wander, and enjoy where they take me.  This morning, I was thinking about metaphor, simile, and the dreaded sarcasm; their definitions, and the challenges they have posed for me over the years. This train of thought led straight to so many memories where I took literally what someone told me, and the ensuing difficulties I had understanding, repairing, or getting over mistaking what I thought someone said, versus what they really meant.  The point being, I am a person who is extremely literal, always have been and always will be.

I recall the very first time I realized this literal thinking might be a problem. Then, it was not so much me questioning how my brain worked, and attempting to either modify how I received and processed information, or explain to others my communication challenge; no, it was me very puzzled why people were yelling for doing exactly what they said to do, and desperately wondering how I could have caused such an uproar for obeying them in the first place.

I was in kindergarten in 1952-1953. Our neighborhood was new, on the outskirts of town, and we did not have a school close by.  Everyday, the children in our neighborhood rode a bus to an overcrowded school several miles away, or one of the mothers drove us in their family car.  I was comfortable with that arrangement, and up until the great crosswalk blunder, I never knew my sincerest efforts to do something, like getting to school correctly and safely, could bring such wrath and disapproval down on my exceedingly confused head.

It was a spring day, the weather was beautiful, and a neighborhood mom was going to drive her son, daughter, my brother and me to school.  I was the youngest in the group, and was feeling pretty happy to be included. Best of all?  The other kids had convinced the grown-ups it was time to allow us to be dropped off on one side of the very busy street our school faced, permitting us to walk in the crosswalk, oncoming cars halted in either direction by a big red STOP sign on the end of a silver pole held by sixth grader crossing guards, to the other side, demonstrating our burgeoning independence. 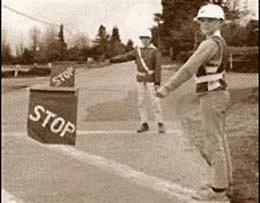 After some initial discussion, and a few “I don’t know about this” glances at me, our parents agreed to the plan. Between the adults and older children, I was well-instructed on crosswalk protocol.  They explained in exquisite detail to wait until all traffic had been stopped by the kids with their big STOP signs attached to ends of their silver poles, and then to walk, never run, across the street between the lines of the crosswalk.  They emphasized how important it was to stay between those lines of the crosswalk.  Easy.  I understood, and was confident I could do it.

What no one took into account was I always have thought in pictures, was very artistic, and I loved to color.  Also, because being precise was just as important to me then as it is now, every attempt I made at coloring was to keep it between the lines.  Always between the lines.

So, there we were, neighbor mom having unloaded all of us on the corner of a heavily traveled road, waiting on the sidewalk for permission to cross the street to our school.  It was time:  A large herd of children started walking, and I, right along side of them, began what I thought would be a great adventure in independence, becoming instead, one of the longest, most embarrassing journeys of my life.

Within seconds, people started yelling, and as I listened more carefully, it dawned on me they were yelling at me.  Uh oh.  This was not good.  Why was everyone on both sides of the street looking at me and yelling at me? At first, there were orders being shouted to get between the lines of the crosswalk.  I looked down.  I was exactly between the lines.  Then, I heard the old refrain, “What is wrong with you?”  At the time, I did not think anything was wrong with me.  I was baffled and feeling hurt, but continued walking as carefully as I could between the lines of the crosswalk.  There was more screaming, some name calling and laughter, and then a vise-like grip belonging to a very grumpy woman latched onto my arm, and dragged me like I was a rag doll to the school side of the street.

My friends and brother were evidently too embarrassed at whatever I did to hang around and help me.  They took off like bullets as soon as they reached our school, and I was left looking into the face of a stranger, someone who had taken it upon herself to rescue me from something about which I still was clueless.  She let go of my arm, and scolded me, saying I needed to learn how to cross a road correctly if I ever was going to do it again.

Mortified and humiliated, I proceeded to my classroom, and finished that day’s kindergarten session in silence, trying to figure out where I had gone wrong.  I never did figure it out; it was only after I got home, and my mother had been informed of my misdeeds by my brother that I was apprised of what I came to think of as my great crosswalk blunder.

As it turned out, being literal me; when told to stay between the lines of the crosswalk, I saw in my mind’s eye big stripes painted on the road, and as I processed the instructions, I understood all that was required of me was to position myself on one of the stripes, and walk very carefully, staying between its borders.  I did not know what that great space between the painted lines was for; and since no one had described its importance, I decided it was some kind of no man’s land, and I would stay away from it.   So, at my first opportunity to be a big independent kid, I slowly and carefully put one foot in front of the other, heel to toe, staying within the distinct borders of a crosswalk line, never straying outside of it into the actual street, nor into the gray asphalt between the lines.

Eventually, I mastered the skill of walking across a street, keeping my footsteps in the designated no man’s land between crosswalk lines.  But upon reflection, and truth be known, I rather prefer the way I did it in kindergarten.  Back then, I was not aware of just how individual my behavior was, and I really wanted to do things the right way.  Now, I still like to do things, whatever they may be, the right way; but I have learned the right way is not necessarily the way everyone else does it.

I like being my own person, and having the peace of mind and confidence to freely think in pictures, take people, literally, at their word, and frankly, paint as I wish, with or without borders.  After all, getting from one side to the other of life’s roads is necessary, but if I take little heel to toe steps, or giant strides, inside or outside the lines, it ultimately is my journey, and I have learned, through all these years of trial and error, how I get there joyfully is up to me.