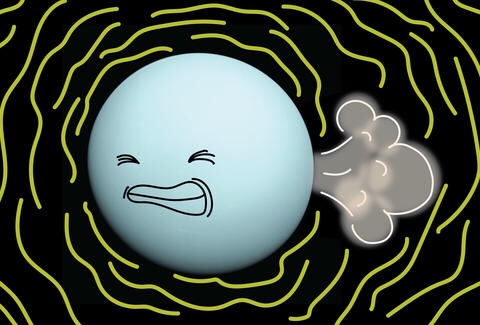 Patrick Irwin, of Oxford University in England, and his colleagues have studied the air around Uranus, and found, among other things, that it stinks. Its most unpleasant smell is caused by hydrogen sulfide, the molecule that gives rotten eggs their unmistakable odor.

Using the Near-Infrared Integral Field Spectrometer (NIFS), an instrument on the 26-foot Gemini North Telescope in Hawaii, researchers studied sunlight reflected from Uranus’ atmosphere, just above the tops of its clouds. There, they observed the signature of hydrogen sulfide.

Composition of clouds in Uranus’ sky has been a mystery for a very long time, remaining so because of its extreme distance from Earth. Unlike planets, Jupiter and Saturn, which have had dedicated orbiter missions, Uranus only has had one quick flyby by NASA’s Voyager 2, and that was in 1986.

It also has been very difficult to locate signatures of hydrogen sulfide and ammonia above the clouds, because a small saturated vapor is all that remains once it travels through the planet’s clouds. However, strength of the NIFS on Hawaii’s Gemini North Telescope gave researchers the ability to make their discoveries.

They have concluded, when compared to Neptune, whose clouds are most similar to those of Uranus, and the clouds of Jupiter and Saturn, formation environment most likely accounted for differences between the planets. The reason being, Uranus and Neptune formed much farther from the sun than Jupiter and Saturn. They believe temperature and location, ultimately, were the coalescing factors in formation of these far away planets, and the subsequent malodorous smell of Uranus.

2 thoughts on “No Joke! Uranus Stinks”