I freely acknowledge I have idiosyncrasies. Quite a few to be completely truthful. However odd they might appear to someone else, they are mine, I own them, and I am all right with them. So for anyone who is inclined to ask me why? My response traditionally is, because that is how I do things. And I say, now more than ever, if it works, stick with it.

A couple days ago, I was having very disagreeable driving moments, and to my complete disregard of tried and true methods for getting from here to there, I decided to do something I never have done before. I made a left turn into that center turn lane that divides two lanes of traffic traveling in opposite directions. People use this technique all the time as a left turn, then holding lane until they can merge into oncoming traffic. In all my driving years, much to everyone’s surprise at an unusual behavior, I steadfastly have maintained the good sense never to charge across a multitude of approaching cars, thereby endangering all lives present, just to make a left turn. 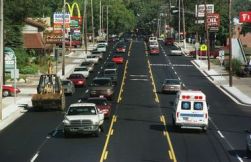 Added to a strong dislike of too many people driving too fast on any given day, I have directional challenges, being one who can get lost even in my own hometown, fairly regularly. This current town, in which I have lived for a mere three months, poses problems for me everywhere I try to drive. It is a college town, and the streets seem to be laid out in some relation to the college, but always at an odd angle or a circle, with the college somewhere near the center. For me, the streets meander all about, and I am certain north, south, east and west were foreign concepts to whoever platted this place. So any time I drive somewhere, I study my Google maps, and try to follow the directions exactly. That generally works, until it is time to turn into an actual parking lot of wherever I am going. More than once, I have arrived successfully, only to miss the entry and whiz on by, having to then figure out what correction needs to be made to get back where I wanted to be.

This is what occurred the other day when I made it to a specialty store, intending to buy a digital meat thermometer. I was delighted because not only was the store located, I had done it driving in thick, pea soup fog. Smiling, I turned into the driveway, and immediately realized it was one too soon, and I was in the lot of a Toyota dealership. There was no connecting pavement between the dealership and the specialty store, just a planter filled with junipers and rhododendrons. Nuts! 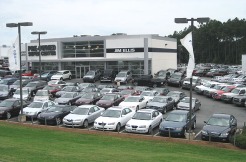 I pleasantly waved to the sales people standing in the car lot watching me maneuver around the rows of parked cars for sale (thanks for being such a thoughtful and appreciative audience to my dilemma and distress, guys! I always perform much better when a group of men stand around mocking my efforts). It took a while, but I made it back to the entrance of the car lot, only I was faced with five lanes of traffic, and the store I needed to the left of my position in the driveway.

My choices were simple. I could turn right, drive down the road to the next traffic light, turn around, and try again for the correct parking lot. Or, I could shoot across two lanes of traffic when I detected an opening in the foggy blur of movement, turn left into that dread center lane, merge into the oncoming traffic, and then get back into the center lane to enter the specialty store’s parking lot, about one half  block away. Whatever nerve I never before had accessed to do such a thing took over my conscious mind. I did it! Oh yes, I zoomed across the first two lanes, and waited in the center lane for a chance to take my place in the flow of traffic.

A reasonable space between cars had appeared, and I made my move. Glancing up into the rear view mirror, just as I completed my merge, provided a heart thumping, unexpected shock. Right there, inches from my back bumper, was a city police car being driven by a very grumpy looking policeman. Oh no. Where in the world did he come from? No flashing lights, no siren; just someone who was not happy to have me in his way. I quickly turned on my turn indicator, and carefully moved over into the right lane. He flew by me, turned on his lights as he did, and tore down the road after someone or something. 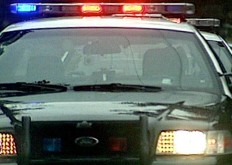 By then, I had missed the specialty store parking lot, again. I was in the wrong lane for turning around, and had just made a city policeman very angry. It was foggier than when I started my adventure, and I still needed a cooking thermometer, because the roast I wanted to bake needed to be in the oven that day. My knees were knocking, hands were sweating, and it was all I could do not to find the nearest road with an arrow marked, You Have Had Enough Nonsense; This Way Home.

I did, instead, proceed to the nearest intersection, turned around, and made it to the specialty store, where the digital thermometer was purchased. Plus glass measuring cups, baking dish, a colander, and some cool spatulas. Kitchen gadgets always have a way of soothing my ruffled mind. After my purchases were bagged, I headed home where I arrived in one piece. The roast made it into the oven, and I took a much-needed nap. 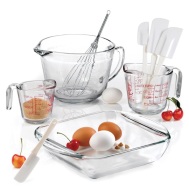 When I processed the events of that morning, I concluded it can be helpful to make oneself do things outside ones comfort zone. Helpful in that it clarifies just how willing we are, in circumstances outside of our ordinary lives, to rise to an unexpected occasion. It clarifies how flexible we are or are not, and whether we can make ourselves choose a path we would prefer not to travel. We can finish journeys with humor, or with humiliation; with satisfaction or regret. We can give it our best, or we can simply say no way, not for me. All in all, I think any of these is valid; it just depends on the standard we choose, how high the bar is we set.

Personally, I always will push myself, because that is the way I am wired. But, I continue learning it is acceptable to cut myself some slack, and give myself permission to fail, or at least, if I can, try avoiding repeating those things which have caused moments I found less than rewarding. What does this mean? Among other life choices, it means I may continue contentedly living with my oddities, my idiosyncrasies; and I for one, having tried the center turn lane as a shortcut to my destination, think choosing to travel the extra distance, seek the quieter way, and make every effort I can to maintain my peace of mind will be more beneficial, because I have confirmed there is no where I need to be worth the stress and adrenalin ride that left turn bolt into traffic cost me. Not today, anyway.

13 thoughts on “No Left Turns; An Idiosyncrasy To Embrace”