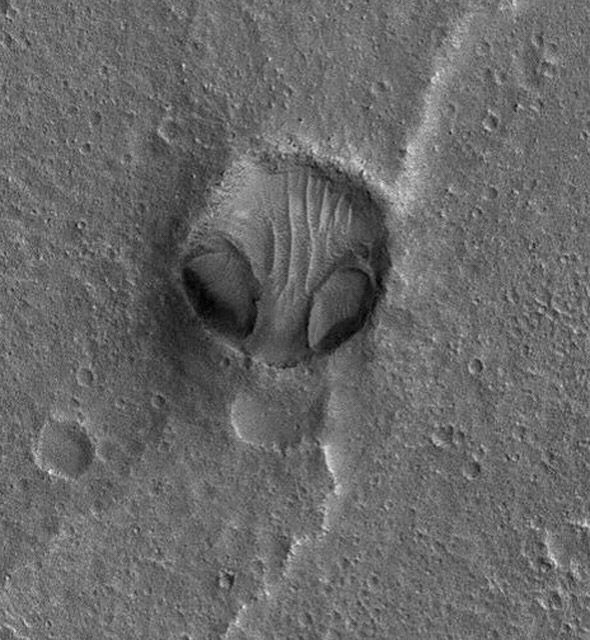 An image first published by NASA in 2005 is currently making headlines. It is a photograph of a large alien-like head, located on Mars. NASA has described it as resembling a bug-eyed head. It also has deep furrows in its forehead, giving it even more of an alien appearance.

NASA has suggested the head may have been created by an asteroid impact. They further posited the giant eyes could have been formed by a flood, or long-ago wind and water erosion. The rock formation is approximately 300 meters by 400 meters. Its eyes are 250 meters long and each matches the other in size.

It has been noted the head bears a strong resemblance to other alien carvings that were done by ancient Britons, including chalk figures in hillsides, like the giant of Cerene Abbas in Dorset and the Long Man of Wilmington in East Sussex.

Further explanation on this stone head is being sought from NASA by UFOlogists and alien investigators. One does not know if an official government agency will ever agree with believers in previous life on Mars; however, as evidence mounts, it seems denying the existence of inhabitants, or at least interplanetary visitors will be more and more difficult. Time will level it all, and hopefully the day will arrive when speculation becomes truth, and there will be no more need for guessing. That will be a very good day.