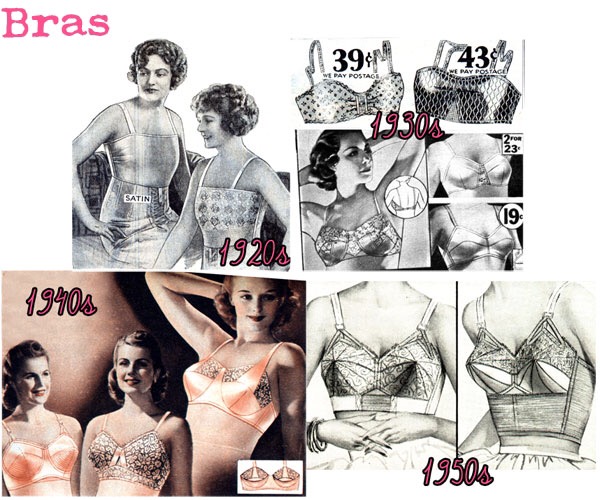 When I graduated from elementary school and entered 7th grade junior high, the primary issue in my life was not changing classrooms and teachers for each subject; homework, which previously had been unknown to any of us; mixing with an entirely new set of kids who were drawn from several other elementary schools; nor even my Physical Education teacher also being my next door neighbor, whose telephone calls I had spent a good deal of my childhood listening in on, because we shared a party line.

My main concern, and object of abiding anxiety that did not present itself with an easy solution, no matter how many possible scenarios I ran through my mind; underwear. Specifically, every girl in that school wore a bra. Every one of them except this girl.

No matter how much I pleaded, reasoned with, cried, negotiated, threatened to run away, or bargained; my mother was resolute in her decision. She said no. She told me I did not need a “brassiere” (I still practically double over in horror at the speaking of that dread word), and when I “developed” and had “breasts” (Oh, how I hated that word, too) to put in it, she would buy me one.

Now, this was not totally unreasonable. I have mentioned before, I was the skinniest kid in school. In junior high, I was 5′ 6″ tall, and weighed 77 pounds. And none of those scant pounds appeared on my boney chest.

But, chest size wasn’t the point. At that age, it’s critically important to belong, and to be as similar to the other kids as possible. We had a locker room, and dressed for P.E. Every girl saw every other girl’s everything. And being different was a huge leap toward rejection, and quite possibly becoming the object of derision and bullying. Those were places I was determined not to go; and it would be many years before I learned to turn a deaf ear to peer pressure, and disallow anyone’s judgement of me to define my sense of value as an individual.

From the summer before school started, and each day after, I cut pictures out of our Sears Roebuck Catalogue and newspapers showing my mother what the other girls were wearing. It was called a training bra, and although I never figured out how some little piece of jersey fabric trained boobs, nor exactly what it trained them to do; I wanted that specific bra. In white. With sweet little pink embroidered rosettes between the flat cups. So simple.

Autumn came and went, with me still deficient in the undergarment department. I was unrelenting in pursuit of that unobtainable training bra, and would continue begging, nagging, and bargaining until I had one.

Christmas arrived, and my yearly behaviors went into overdrive. My mother had, for as long as I could remember, given me gifts for any occasion that, regardless of what I asked for, she liked. Her reasoning was the best gift given is that which you want for yourself. So wrong on so many levels.

I knew where she hid the wrapped packages, and took advantage of every opportunity I was left alone to carefully open each of my gifts, shudder thoroughly, wrap them back up, and replace them in her hiding spot. This advance shuddering and disappointment prepared me for the actual Christmas day, when I would then open my gifts in front of everyone, giggle, clap, and thank them for what I always never wanted.

That Christmas day rolled around, and I was comfortable in knowing what was in each package, and how I would react. Opening activities proceeded smoothly, and just as I believed we were done, my mother went to her bedroom, and came back with a package I had not seen before. She was grinning, and told me I might want to open it in my bedroom, alone.

I eagerly took it from her, and ran to my room. Ripping the wrapping off, my heart soared, because I was sure I knew my desperately longed for training bra was in there. Wrapping off, tissue paper gently spread apart; there it was!

I stared, tears welled up in my eyes, and I lifted my new bra out of the gift box. Silently I looked at the tag sewn inside: Size 28 AAA. I already had learned that was the smallest size made, at that time. And it was mine.

I was so grateful I had opened the present in my room, alone. Having not seen it before, I had not been prepared for what was before me…my mother had done it again. A cream colored, size 28 AAA, padded, pointy, 1950’s style, bullet brassiere! Those cups stood straight out, stiff and stitched in circles around their cone shape. And no pretty little embroidered rosette. All I would need to complete the picture was a cigarette and martini.

I put my bra on, and wore it that day. My mother was so proud at what I only can guess was her scrawny daughter finally having developed. All the extended family showed up for our traditional Christmas dinner, and I would have paid each one of them to stop staring at my transformed chest.

I survived that pivotal time in my life. Working extra hard gave me the means by which I could save my allowance, and finally buy the bra I really wanted. My mother never knew, because her permission was what I had needed, and from then on, it was easy to move forward with the real thing.

I always remembered what that bra represented, how hard I worked for it, and the challenges I had to overcome when I burned it in the 70’s. This I know, it wasn’t just an undergarment.

And though I doubt many women, today, have experienced much of a journey with their bras, I know what it meant to start with one whose predominant purpose was to attract males, to next participate in the bonfires that symbolized women’s freedom and emancipation from stereotypical roles, and then become a nursing mommy who was so grateful for those flaps in front. Finally, the reward, after so many years of confinement, to experience, literally, unfettered joy at the end of a day when that thing was whipped off, and one settled in for relaxation and sheer comfort.

No, the bra never was just an undergarment. It was a type of metaphor for any woman’s experience in a society where she can allow herself to be defined by others, or more importantly, by only herself. It’s an ongoing story, and let’s hope it gets better and better with each telling.

11 thoughts on “Saga Of A Brassiere”