There are moments in time which never, never leave us. We look back, and view crystalline images, clear, sharp, perfectly defined. For those of us who witnessed the inauguration of John F Kennedy in January, 1961, there was much to remember; but nothing and no one was so stirring as Robert Frost.

The upper grades of my country school were assembled in the cafeteria, our neighborhood pastor had loaned a tiny black and white television to us, and we were privileged to watch the inauguration of our nation’s 35th president. We were in awe of the occasion, and sat quietly, respectfully, and did not take our eyes off that little television. It was history in the making, and we all seemed to sense the importance of that time, and those people. 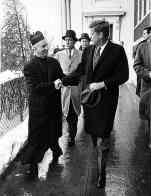 The invocation was given by Cardinal Richard Cushing, additional prayers were offered by the Archbishop of the Greek Orthodox Church, and the pastor of Central Christian Church of Austin, Texas, with a final blessing given by Rabbi Nelson Glueck. After 28 minutes of praying, Marian Anderson sang The Star Bangled Banner, and Fanfare for the Inauguration of John F Kennedy, composed by Leonard Bernstein, was played.

It was time to get down to some serious oath-taking, and Lyndon Johnson, Vice President, was going to have his oath administered by Sam Rayburn, Speaker of the House of Representatives. It went quickly, and without incident.

And then, there he was. Eighty-six year old Robert Frost, the first poet ever to participate in a presidential inauguration, stepping upon the podium, and placing his papers on the lectern. He had written a new poem, titled Dedication, to honor John Kennedy, and we all were going to hear it that day. What no one could foresee, though, was a too-bright sun shining, the glare reflecting off snow, and a breeze blowing; making it altogether impossible for Mr Frost to read his poem. 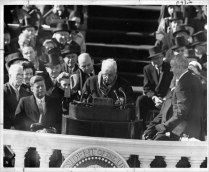 He struggled, only able to read three lines from the paper before him. It was awkward to watch, everyone wondering what would happen next; this was the inauguration, after all. He had faltered, and then, in the most amazing recovery imaginable, he set aside the poem written for this occasion and this man; took the attendees’ and audiences’ hearts and attention into his hands, and recited, from memory, a different poem, thus endearing himself forever to all who witnessed his courage that day. And here is what Robert Frost gave his new president, and an entire nation; all of us charged, ready, and excited, anticipating the times to come–

The Gift Outright
BY ROBERT FROST
The land was ours before we were the land’s.
She was our land more than a hundred years
Before we were her people. She was ours
In Massachusetts, in Virginia,
But we were England’s, still colonials,
Possessing what we still were unpossessed by,
Possessed by what we now no more possessed.
Something we were withholding made us weak
Until we found out that it was ourselves
We were withholding from our land of living,
And forthwith found salvation in surrender.
Such as we were we gave ourselves outright
(The deed of gift was many deeds of war)
To the land vaguely realizing westward,
But still unstoried, artless, unenhanced,
Such as she was, such as she would become.

I will never forget Robert Frost’s presence, nor his poem for our new leader. The years and events that followed did not turn out the way we all expected, and for which we hoped. But in that brief moment, a past and a future represented, together, the glory and brilliance, indeed, of a nation as she was, and as she would become.

22 thoughts on “Robert Frost And His Gift Outright”