The cordial invitation that was never sent. It indeed was a day of celebration for the Pilgrims who had survived the hardest year of their lives. A bountiful harvest had been completed, and a thanksgiving feast definitely was in order. However, the Wampanoags, indigenous people who had assisted them throughout the year, had not been invited; and it was because a treaty for mutual protection had been agreed upon by the Wampanoags and the Pilgrims that they were present at the feast.

Part of the celebration, as one Pilgrim, Edward Winslow, wrote was, “we exercised our arms”, which actually was an exuberant display of gunfire into the air. It is believed Chief Massasoit was informed of the abundance of gunfire, and thinking the Pilgrims were being attacked, went to provide assistance, as they promised each other they would in their treaty.

When Massasoit and his ninety men arrived at Plimoth Plantation, they found a celebration, not an attack. They were asked to stay and join in; however, because the guest count just increased from fifty-three to one hundred forty-four, Massasoit sent his men out, and they returned later with five deer, which were added to the feast.

And it was a feast that lasted three days. It bears mentioning that this three day celebration with food and drink for one hundred forty-four Pilgrims and Wampanoags was created, looked over, and served by four adult women, and five adolescent girls. That is a lot of cooking for a lot of people.

And what was the fare for this party of thankful folk? It was a panoply of meat, fowl, fish, vegetables, fruits, berries and beer. Venison had been provided by Massasoit’s men, and the Pilgrims had gone fowling, which meant they hunted and provided wild turkeys, ducks, and geese. They had caught cod fish, eels, and bass; gathered oysters, lobster, and clams. Squash, turnips, cabbages, parsnips, carrots, and onions had been grown and were plentiful. Beans, pumpkins, nuts, grapes, berries, and corn were added to the feast. There was enough food, drink, and cause for everyone to be grateful. 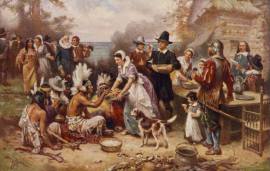 And grateful they were. One hundred two passengers sailed to their new home aboard the Mayflower, and only fifty-three survived the first winter. It was a brutal time, but in that first year, they learned how to build, hunt, gather, fish, and garden in a place so unlike their homes left behind in England. They were beyond fortunate to have had the assistance and guidance of the Wampanoags, without whom they most assuredly would not have survived. So, even though no invitation was sent, those who mattered gathered during those days of autumn at Plimoth Plantation, and gave thanks, celebrating together the knowledge that….”nothing is more honorable than a grateful heart.” ~ Seneca