We all know what today is, right? National Constitution Day! Yes! This is the 227th anniversary of the day our United States Constitution was signed in Philadelphia, Pennsylvania.

Besides being the supreme law of the United States of America, which we all have learned about since elementary school, there are many interesting facts pertaining to that document, produced in the late summer of 1787 at the Constitutional Convention, which never get taught in school.

One, which I find particularly intriguing, is the spooky legend of the curse of the Constitution. Out of the thirty-nine men who signed it, five met untimely deaths. In 1802, the delegate from North Carolina, Richard Spaight, was mortally wounded in a duel with Congressman John Stanly. Alexander Hamilton, a delegate from New York, was killed in a duel with Aaron Burr in 1804. In 1806, George Wythe, from Virginia, died of arsenic poisoning. Pennsylvania’s Gouverneur Morris died in 1816 from some unsuccessful self-surgery, in which he tried to dislodge a urinary tract blockage with a piece of whale bone. And in 1829, New York’s John Lansing vanished without a trace after leaving his Manhattan hotel room to mail a letter. Just notable men, with an exceptionally significant historical activity in common, having very bad days? Or something else. Who can say?

I also find worthy of noting; those larger than life men from our history books who were participants in framing the Constitution, but did not sign it. They were not in attendance at the Constitutional Convention, some for unavoidable reasons, and some for personal reasons. They are: Thomas Jefferson, who was in Paris serving as the minister to France; John Adams, who was in London serving as the minister to Great Britain; Samuel Adams, John Hancock, and Patrick Henry, all who had been invited, but declined. Patrick Henry said he “smelt a rat in Philadelphia, tending toward the monarchy.” And of course, we cannot forget the entire delegation from Rhode Island boycotted the convention, because they did not trust a powerful federal government.

With all things Constitutional having been said and done that September in 1787, I would like to give a shout out to the gentleman who actually handwrote the document. Let’s hear it for Jacob Shallus, Assistant Clerk of the Pennsylvania State Assembly, who, quill in hand, was paid $30 and given two days to write 4,543 words on four sheets of vellum parchment. Well done, Mr. Shallus, well done!

I have a copy of the United States Constitution, which I have carried in my wallet since 1981. Reading it is a privilege, and knowing what we believe, and why, gives me a foundation upon which I feel comfortable when it is time to declare my opinion, as a citizen, that something is in compliance with that document, or not. There are greater minds than mine continually issuing decisions on the Constitutionality of issues facing our nation, but I, for one, am grateful that I may participate, and be heard, to the best of my ability, in this republic, this country, this place I love and call my home. 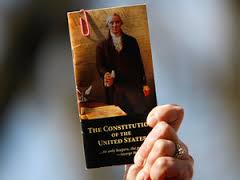 14 thoughts on “That I May Participate In This Republic”