It’s been almost two years since I moved to this little town I now call home. Up until last month, I spent most of my time here caring for others, resolving their unfinished business, and endeavoring to build a new life for myself; because after all the work is done, tomorrows continue rolling in, and I wish to furnish them with the best me, and environmet that I can.

While all this has swirled around my months of activity, time and again, I have tried to figure out how the rest of  the world accomplishes its tasks with such ease, as opposed to the comedy of errors which accompany and complicate the simplest things I attempt. I do not recall a time when it was not like this, which is probably why I find so much irony in just about everything; irony being, to me, life’s knee slapping, hilarious means by which we get from one moment to the next.

Need an example from today, alone? This morning began with a much anticipated newspaper delivery. I called my local newspaper yesterday, and arranged a year’s subscription. It was fun speaking with the customer service agent, and during our conversation, she told me she would find the best rate out there. All right! She searched and found a rate that was perfect for me, so I ordered home delivery for a year, and paid for it then and there. She said my first paper would be delivered today. I should have known this experience was too much fun, and way too easy,

I brought my paper in from the porch, today, right after sunrise. Preparing coffee, I absently stared at the tiny rolled up paper where it lay on the ottoman. Hmmm. That thing was really small. I realize my town is not huge, but it is a college town, and I have found a newspaper’s size tends to be proportionate to the size of its population. This was an odd little roll of printed paper, secured with a tiny rubber band.

Sitting with my cup of hot coffee, and feeling very content, I removed the rubber band, happily anticipating delving into local weekend news from my little Oregon town. **Surprise!!** Local news was going to have to wait, because what greeted me, and explained its tiny size, was a newspaper from the next town over, about nine miles as the crow flies, across the Willamette and Calapooia Rivers.

Now, I am sure the Albany Democrat-herald is a fine paper, but I do to live in Albany, and I certainly did not order their newspaper. I concluded it was a simple carrier mistake; this must be a common error for new subscriptions. No worries. I believed a quick phone call to the Circulation Department would set matters straight in a blink, and all would be well by Sunday. Not even close!

The customer service agent I reached was charming and polite, albeit she could not hear very well.  After spelling my five letter last name four times, and repeating my address even more; she said, “You know, I think I will turn the volume up on my phone, so I can hear better.” All right! That seemed a very good idea for both of us.

Once the agent figured out who I was and understood I received the wrong paper, things really started rolling. Downhill. She began with several “Uh oh’s”, and progressed to “Oh no’s”. It seems the agent with whom I spoke yesterday got carried away in trying to find me a good deal. She found the cheapest promotional rate, but neglected to notice it was not in my town, nor my county. 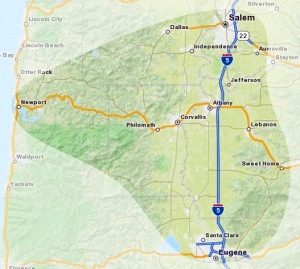 Today’s agent searched and searched, unfortunately only coming up with a rate for my newspaper that was triple what I paid for the wrong one. She apologized profusely, and asked what I would like to do. Being ever practical, it was an easy decision. Keep the wrong newspaper! I saw no reason to pay three times as much for a paper I had been reading online for almost two years. I already paid for this new one, it was only a nine mile difference, and if it really became a problem, I could drive over to Albany, and read the paper there.

Besides, my last fortune cookie advised me to expand my borders. All right then. Consider it done!

7 thoughts on “Extra Extra Read All About It”